The Belgian band Be Irving -- named for the character 'Irving' in their song Killing Irving -- produce indie, pop-rock and synth music that experiments with samples and field recordings from everyday life. Since the 2017 release of Be Irving's self-titled debut EP the band has been honing their craft and working on the new EP 'Honest Laughter', to be released in the spring of 2021.

Be Irving formed in 2015, as a three-piece with vocalist-producer Frederik De Clercq, guitarist David Robbrecht and bassist Nathan Van Kersavond. Mostly focusing on experimenting with field recordings, De Clercq grew a database of otherworldly sounding sampler instruments and synthesizers that defined Be Irving's music throughout the years. The use of Robbrechts classical guitar, characterized by a creative use of stomp boxes is another distinctive trait of the band's sound, as well as the use of vocal harmonies. After the departure of Nathan Van Kersavond, Be Irving teamed up with drummer-producer Dimitri Alexander Defossé and bassist Sylvain Carlier Jr.

This new, inspiring collaboration led to a spot in the finals of Humo's Rock Rally 2020 and the release of the 'Honest Laughter' EP. Somewhere in the no man’s land between Damon Albarn, Beach House, alt-J and Sparklehorse, this four-piece has stumbled upon a fresh and intense sound. 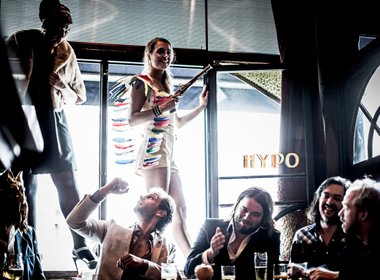